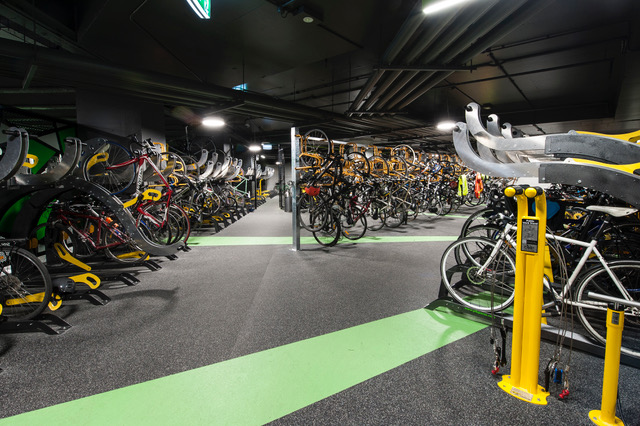 In Australia, commuters truly are spoilt for choice, however bicycles are increasingly littering the streets and gathering dust and rust in bicycle holding facilities. Thankfully with a growing number of community run programs, unclaimed bicycles in residential, commercial and public storage units are finally being reclaimed and delivered to those in need.

We recently collected a donation of 8 bicycles from ASX listed property group, The GPT Group, a new contributor to our cause. Like others, they have enabled us to recycle abandoned and unclaimed bicycles which would otherwise be sent to landfill. A half yearly audit and lengthy notice period by GPT at their Melbourne Central Tower property, resulted in a donation which will change many lives for the better.

As a large corporation, GPT values health and wellbeing as reflected through a growing emphasis on premium end of trip facilities in their commercial buildings. Gone are the days where riding to work means you’re left sitting in your own sweat for the day, or smelling like a wet dog after a sudden Melbourne downpour. Businesses like GPT are paving the way, with employers and health-conscious job seekers embracing the added lifestyle benefits, with hot showers and fresh towels now part of the daily commute.

Our own Amanda James, a GPT property tenant, was invited to an International Women’s Day event in March 2018. It was here that she connected with Caleb Buster, cyclist and Customer Relations Manager at GPT. Amanda, inspired by the events strong message, resonated with our own works in Namibia where women are being empowered as bicycle mechanics. She reached out to thank GPT for the invite, and took an opportunity to share Bicycles for Humanity’s (B4H) initiatives in Africa and locally.

We caught up with Caleb to share GPT’s experience since joining the Bicycles for Humanity (B4H) family.

How did GPT discover B4H and what enticed you to become involved?

B4H’s Amanda James, a GPT tenant, reached out to us earlier this year and introduced us to the cause. Although we don’t have an overwhelming bicycle abandonment issue in our building, we value the importance of every bicycle. Within our Melbourne Central Tower building, we run an audit roughly every 6 to 12 months. A notice period of one month is given, followed by storage of unclaimed bicycles for two months. We had 8 bicycles which previously would have become hard rubbish, we’re glad we now have an opportunity where these can be collected and reused by those in need.

We were excited to discover you have a family link with Eastern Africa, could you share more about that?

Haha, yes that’s true. My wife grew up in Tanzania and can speak Swahili. A few years ago, we went back to visit some old family friends. I got to experience first-hand what it’s like getting around. In Australia, you have so many options, there you are limited by a mixture of old and new public transport. We travelled overnight for 12hrs on an old bus. In larger towns taxis, or mini vans, travelling with 20-40 people crammed in. Transport is an issue.

In Australia, it appears we’re spoilt for choice. Bicycle abandonment is noticeable in Melbourne, any thoughts on how commercial buildings can help streamline the process so bicycles don’t go to waste?

We try to make it easy, and reduce the barriers for commuters by providing end of trip facilities with change rooms, towels, toiletries and secure storage lockers. It helps give value to the whole experience and encourages health and well being. Luckily, we don’t have a large problem with unclaimed bicycles likely due to this, however bicycles do get forgotten. It’s great to know that we have somewhere to send them now.

As a supporter, what drives GPT to get involved with community projects and fundraising?

We’re eager to support where we can. At this stage, simply the capacity to donate bicycles which would otherwise go to landfill. At GPT, our community arm focuses on at risk youth in Australia. Weekly our lobby flowers are auctioned with funds donated to the salvos. Daffodil day is another regular we support. There may be an opportunity in future to offer a stand or stall to B4H and others to promote campaigns and engage tenants.

What words of encouragement do you have for other organisations considering supporting the B4H cause?

It’s a great cause, bicycles getting a second use where they would otherwise go to hard rubbish. Having the convenience of B4H collecting the bicycles on a set date makes it a simple smooth system. This was really valuable. It looks great as an initiative and has limited barriers.

If you live or work in a building which offers a bicycle storage facility, we urge you to contact your property manager and encourage them to consider Bicycles for Humanity as part of their audit process. To arrange a collection, please email info@bicyclesforhumanity.com